In 2017, Ork Posters celebrates its 10th anniversary, W O W ! In celebration, we’ve teamed up with artist Dan Elliott, who works under the moniker Pieces of Craft, to create this limited edition, collaborative print. Both Ork and Elliott work at the intersection of type and maps, mixing the two styles seemed meant to be. Read more about our 10th Anniversary collaboration here.

“For the masses who do the city’s labor also keep the city’s heart.” by author Nelson Algren in Chicago: City on the Make – although Algren was talking about Chicago, the same sentiment applies to any of Ork’s map designs, artwork for people who love their city. Algren was saying that the vein of the city doesn’t run through city hall, or through fancy galleries, or it’s 1%-ers. It runs through its people, the people out there working every day, out there taking care of each other and of their communities, and this is who we make artwork for.

This print is  an 18″ x 24″ typographic map of the neighborhoods within the borough limits of Brooklyn. Limited Edition of 100 prints. Each print ships with a commemorative 10th anniversary signature card that includes your edition number and signatures of both artists, Jenny Beorkrem (Ork Posters) and Dan Elliott (Pieces of Craft).

Please note because of the nature of the paper and the heavy coverage of the ink, the paper has some subtle rippling. If you order the print with a frame, it will be permanently adhered to the foam core backing board prior to being framed to ensure it stays flat inside the frame. If you do not wish for this to be done, please send us an email immediately after placing your order and let us know. 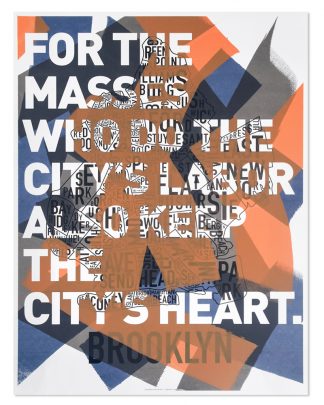 We are currently open and shipping orders! Stay safe out there!