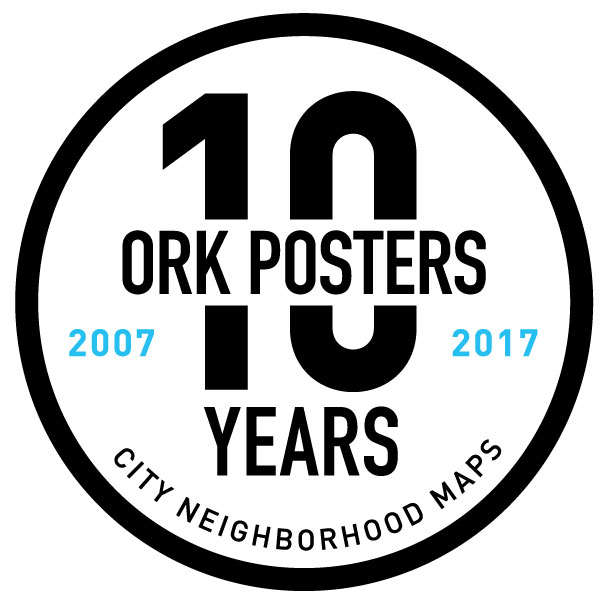 I’m so proud to celebrate 10 years since my first neighborhood map design. I can remember dreaming early on about the business lasting five years, and now all of a sudden it’s 10?! It truly is beyond my dreams. It is only thanks to all of our wonderful customers that I made it here today. Without their support, Ork Posters wouldn’t exist, and not a day passes by where I don’t think about it. Whether you bought a poster yesterday or 10 years ago, I hope it provides as much enjoyment as I’ve gotten from creating them.

In celebration of our 10th Anniversary we’ll be releasing a series of artist collaboration prints of the neighborhood maps. The first collaboration is with Dan Elliott of Pieces of Craft. I was first introduced to Dan’s work through a mutual friend and once you see Dan’s work for yourself, you’ll see why it immediately caught my eye! Dan’s line of work applies bold quotes to old maps, creating striking visuals and wanderlust themes.

“My infatuation with maps started at an early age. I remember laying on the floor in the living room with my parent’s atlas, following the roads from page to page, figuring out the best way to get to cities I had only heard of in the movies. I didn’t travel much as a child, so most of my ideas of foreign places—like Los Angeles—was through other peoples experiences which I discovered through literature and pop-culture. I may have created some of my notions of these cities, leaning heavily on my sense of imagination while I day dreamed & pored over those maps. When I began visiting the Hamilton Wood Type & Printing Museum, I discovered the brayer as a tool for applying ink, not just to antique type, but to paper as well. I combined this “new-to-me” tool, my collection of maps built over the years, and literary references describing the places found in—or ideas relating to—the maps as a starting point for this series of explorations.”
– in the words of Dan Elliott, Pieces of Craft

Obviously Dan’s use of maps aligns well with Ork Posters subject matter, but his type-forward style also carries a certain “urban” look that coordinates but doesn’t compete with the type style of my neighborhood maps. Dan and I chose a quote from author Nelson Algren for the series, “For the masses who do the city’s labor also keep the city’s heart.” Algren was speaking of Chicago – fitting since it’s Ork Posters home and the first city map I designed – but it’s also relevant to all of our cities. The people make the city and the city dies without their work and their love. I don’t know why I’m trying to say it another way, Algren says it so much better!

Dan created the design in the 18″ x 24″ size, so we selected only cities with those poster dimensions for this particular series, and selected cities that to us, in particular, seem to have an undercurrent of existing on the backs of its people – Chicago, Philadelphia, Boston, and Brooklyn. Dan created the design through his original method, applying colors with a brayer over the type as a stencil to block it out. We then digitized his design to create color separations and then screen printed it with transparent inks over top of our offset printed Classic Black and White posters.


If you’re looking for an artist collaboration print for one of our other cities, consider joining our email list, as we’ll be adding more later on this year!

About 30% of our USPS shipments are taking up to 6 weeks to be delivered. If you are in a rush, please consider UPS shipping options.